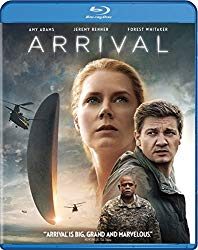 It’s been a busy week, but I’ve got another good movie and deal to tell you about! Have you seen Arrival yet? Like Interstellar, which I reviewed a couple of weeks ago,  it’s a thought-provoking sci-fi movie, quiet and tense, and it’s available on Amazon for $9.99.

Arrival Movie Review: What Is It About?

When mysterious spacecraft touch down across the globe, an elite team–lead by expert linguist Louise Banks (Amy Adams)–are brought together to investigate. As mankind teeters on the verge of global war, Banks and the team race against time for answers–and to find them, she will take a chance that could threaten her life, and quite possibly humanity.

Anyone who likes movies that are science fiction, or have less action and more intelligence and emotion, will like Arrival. Louise, the main character, has this whole backstory that involves a daughter she has that dies (don’t worry: I’m not spoiling anything. They tell you that in the first five minutes of the movie), and it’s fascinating how her visions/memories of that daughter weave into the ever-increasing tension of the plot. At the end, there’s this big a-ha moment where you as a viewer put the puzzle pieces together, and it feels huge, but in the movie, it’s a very quiet moment.

Instances of human-to-human violence: a few (glimpsed as part of news broadcasts)

Arrival is available on Amazon for $9.99, for either the blu-ray or DVD versions. So totally worth it.