Tips For Going to FanX, For Geek and Non-Geek Alike 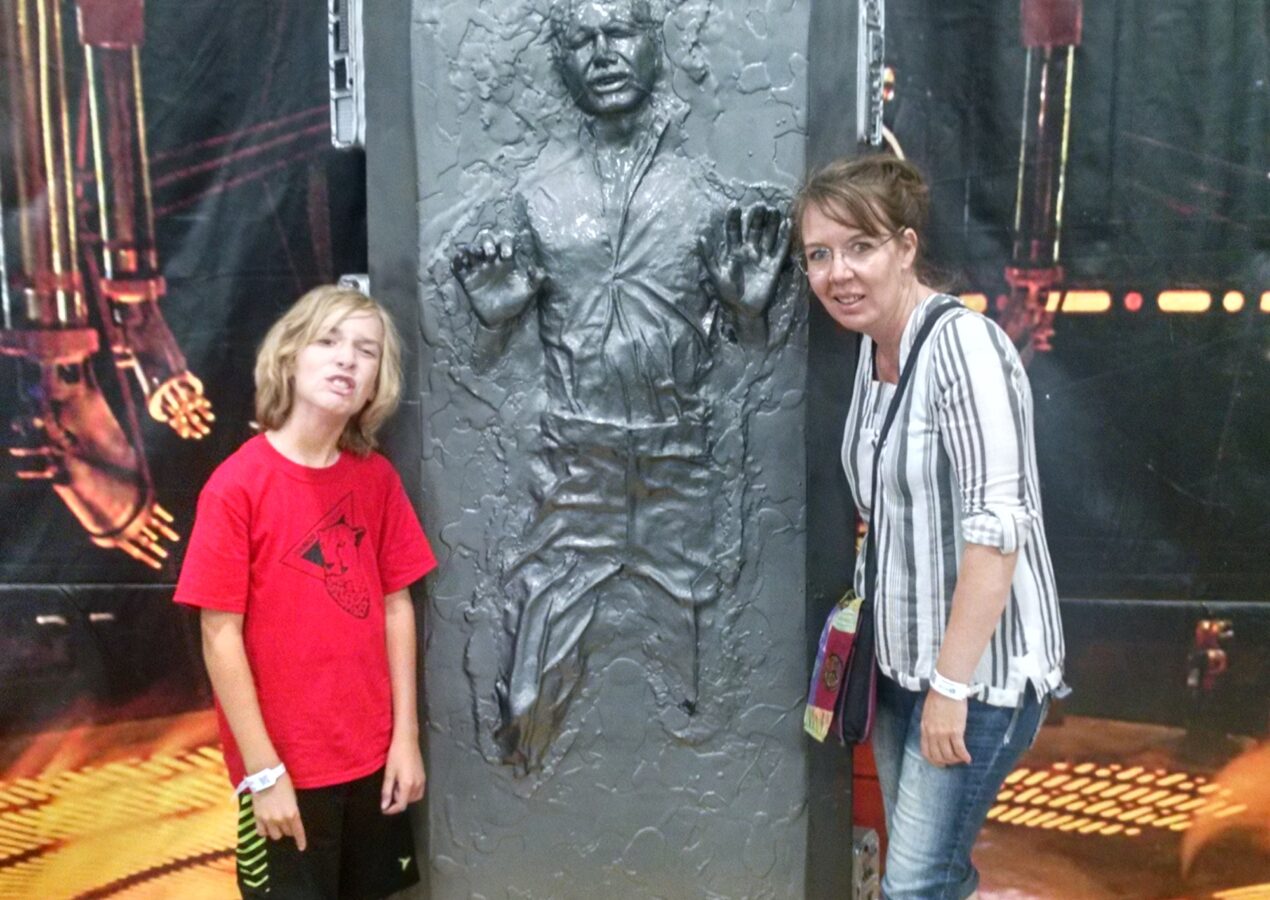 Note: This post contains an affiliate link, which means I get a small commission if you click through to an advertiser’s website and buy the product.  Otherwise, it doesn’t cost you anything.

Comic conventions are a $4 billion industry in the U.S., according to Rob Salkowitz, an author on the subject. That means A LOT of people are paying A LOT of money to engage with representations of their favorite books, movies, video games, and/or celebrities. If you’ve ever gone to one of them, you’ll easily recognize that those who go tend to be passionate about their pop culture. They dress up (or “cosplay) like their favorite characters, sometimes in elaborate costumes. They’ll rally at celebrity panels, sometimes quite loudly. And they wait in long lines to get in, sometimes for hours. If you haven’t gone to a comic convention, let me tell you what it’s like.  I just got back from Utah’s comic convention, called FanX. Trust me, even if you’re not a fan of “peak geek,” you’re likely to find something fascinating there.

The Salt Lake FanX Convention began in 2013. At its first event, over 70,000 people attended. The next event, held 6 months later, drew over 100,000. I remember trying to get into that one. The line wrapped around the Salt Palace Convention Center, which covers about three city blocks, at least three times. Almost everyone was cosplaying. With two young kids and wearing only regular clothes, I didn’t even make it to the line. I just returned from the 2018 convention, however, with my now-older kids. It was awesome, fascinating, crowded, energetic, expensive, huge, and amazing.

Here are some takeaways I gathered for future use, both yours and mine!

Tips for Enjoying The Experience

If you follow me on Instagram, you likely saw my Instagram Story of what FanX looked like. If not, follow me so as to not miss stories like that in the future! The Salt Palace is a huge venue, and FanX filled every square inch of it. We easily walked three miles just on the convention floor itself, not counting the three-block round-trip walk to and from our car to the convention center. So…

Whatever you’re wearing, even if it’s sandals, make sure they’re comfortable! I suggest Roxy shoes similar to these:

I have some and they are so comfortable!

FanX tickets cost between $20 and $260, depending on which day you go and how much access you want to the celebrity photo ops, autograph sessions, and panels. We went on Friday, the middle of the three days, after school, because it was important that my kids didn’t miss any school. We couldn’t go on Thursday, and we wanted to avoid the craziness of Saturday. Friday tickets were normally $35 if bought online beforehand, $40 at the door. I found a deal on Groupon for $24.50 tickets. It made the entrance process more complicated than it already was (i.e., you could only enter through the North entrance portal), but it was worth it. Kids under 8 were free with the purchase of an adult ticket.

It took us an hour and a half to get from our house 29 miles away to the convention floor. This was through non-rush-hour traffic, a journey that usually only takes half that time. There’s a Trax station right next to the Salt Palace. I highly recommend taking public transport to get there. 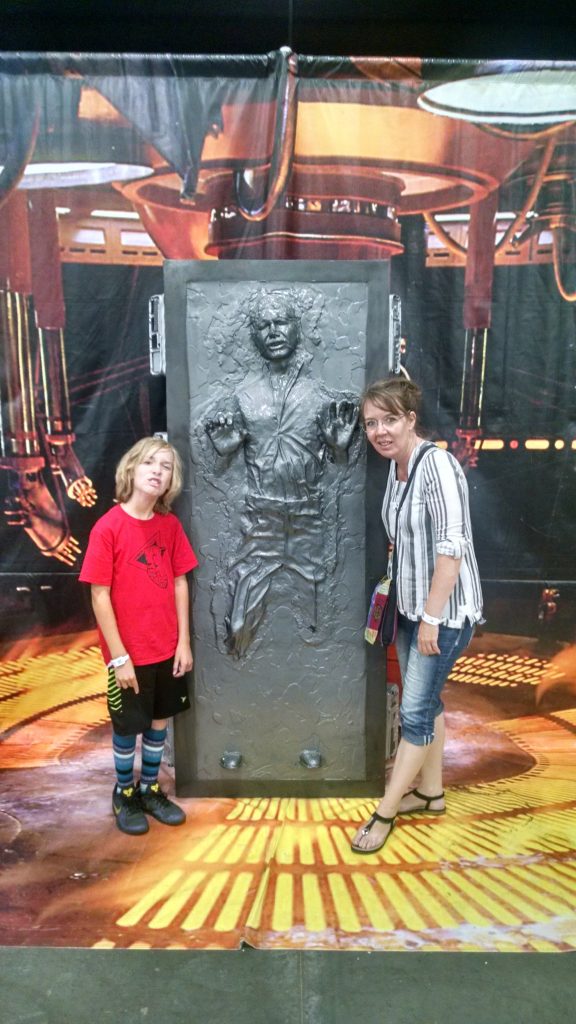 My youngest and I, with poor Han Solo 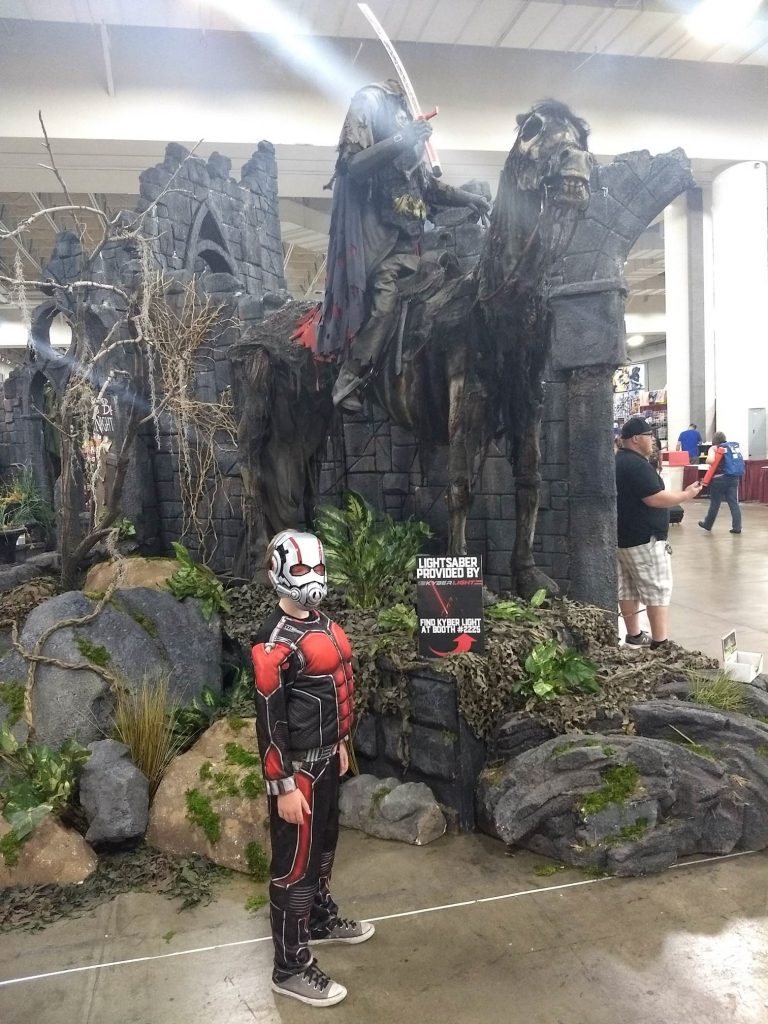 My nephew as Ant Man, in front of a Haunted House booth. Photo credit: Heather Francom. 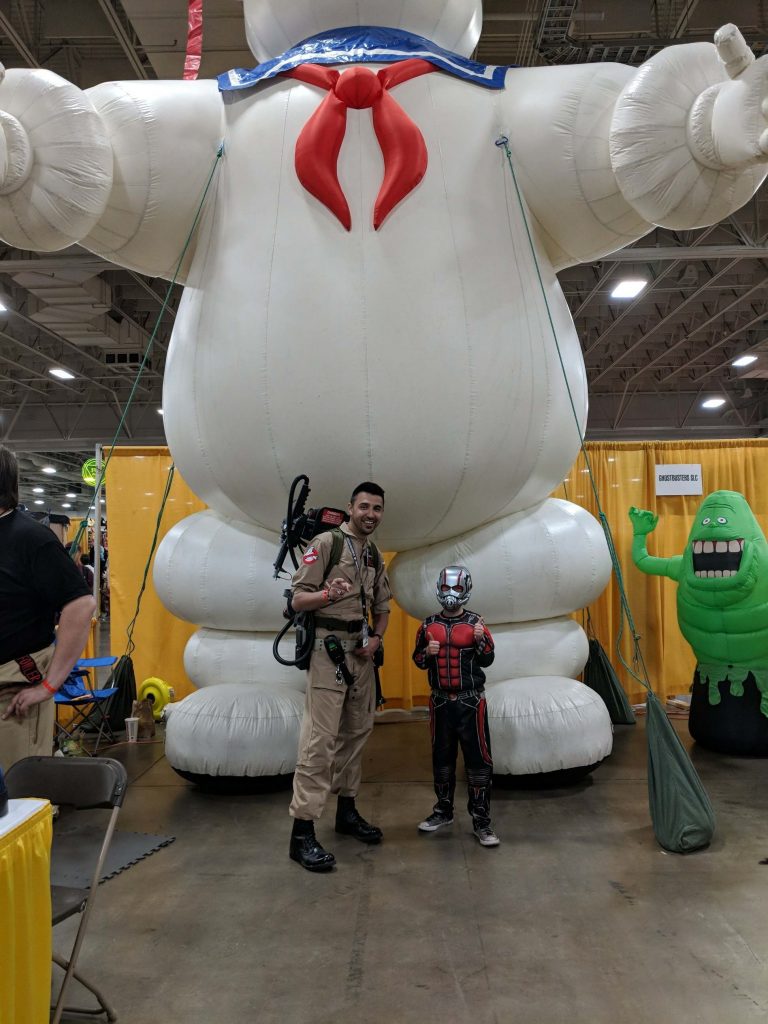 Antman with a Ghostbuster and his foe. Photo credit: Heather Francom. 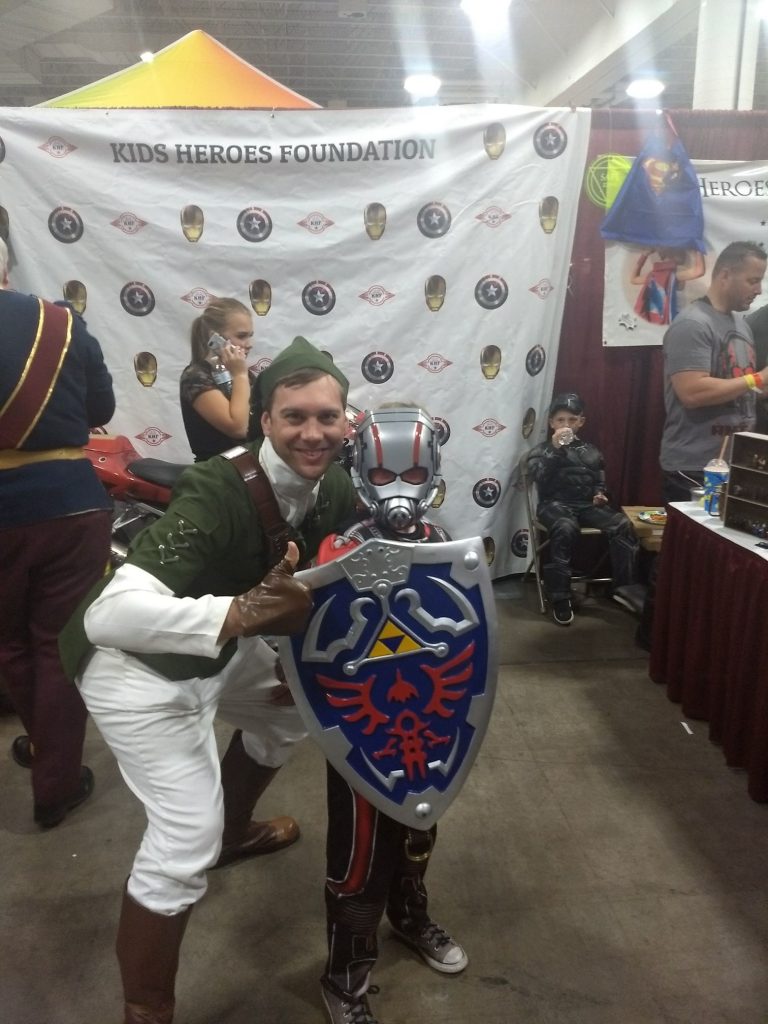 Link, from the Zelda games (which I love!), with my nephew. Photo credit: Heather Francom. 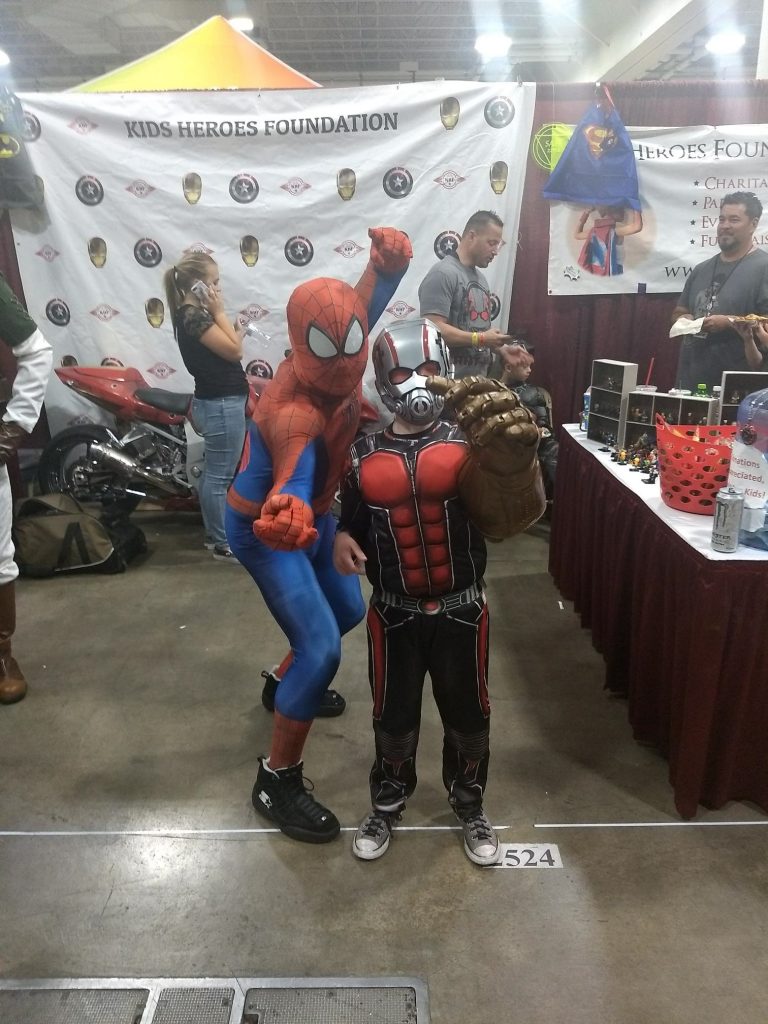 Spiderman and Antman together…with some kind of mutation on his arm? Photo credit: Heather Francom. 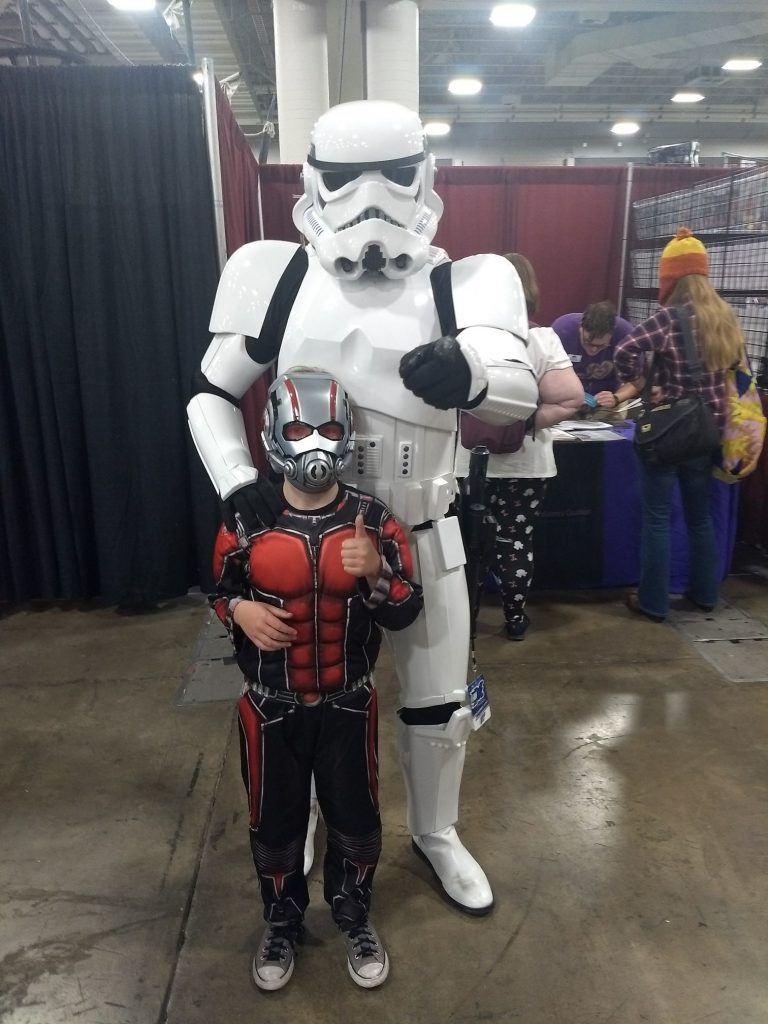 If you go with kids, like I did, they’re going to pull you from booth to booth. Be strong, and make them slow down and pose for tons of pictures. There will be so many photo ops!! So…

There are hundreds of local and national vendors selling everything from Harry Potter jewelry to fan art to custom game controllers to Overwatch weapons. That doesn’t even count all of the book booths! It will take you a minimum of two hours to walk all of the aisles, if you don’t buy anything, take any pictures, or do anything extra. I have friends that are there right now, and will have attended and been jam-packed busy, the entire three days. There’s something there for everyone.

I promise you, no matter who you are or where you’re from, you will find the people at FanX to be fascinating.