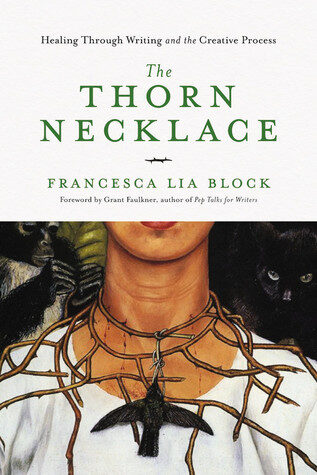 “Frida Kahlo had polio as a child,” said Francesca Lia Block in her book The Thorn Necklace, referring to the painter, “survived a horrific accident at eighteen that shattered her body and pierced her pelvis with an iron hand rail, and suffered through a number of resulting miscarriages. To add insult to injury, her husband…had an affair with her younger sister. But Frida produced hundreds of works of art…that elevate unbearable grief to shocking beauty. Some artists survive their pain, some do not. But all channel it into art.” 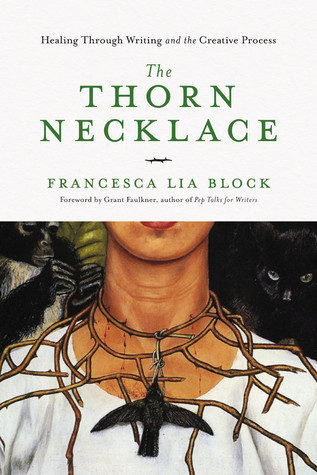 It is that channeling that Block refers to as the thorn necklace for which she names her book. Kahlo herself said: “my painting carries with it the message of pain,” and that pain is definitely evident in her painting Self-Portrait with Thorn Necklace and Hummingbird, which you can see here. To be an artist, to a certain extent, is to take the pain that life gives you and channel it into something beautiful, to show that something good can come from something bad.  I believe it’s also to don a painful mantle as well. In the painting, Kahlo wears a necklace made of thorns. It pricks her skin and makes her bleed. To produce true beauty–no matter the artistic form–one has to undergo a certain amount of “pain” at worst, or challenge at least. To create whole worlds from nothing, in the case of science fiction and fantasy literature, and structure them into cohesive and compelling plots populated with characters that feel real is no small task.

Block’s book is a memoir of sorts, describing the challenging life path she’s traversed and couching that in her thoughts on writing. “A way to help a reader to identify with a protagonist,” she says, “(and thereby gain more life-enhancing insight from the story) is to the show that character’s…flaws. Flaws…get a character into trouble, which satisfies the reader’s need for story.” She provides this before describing the flaws of some well-known book characters as well as some of her own flaws and those of her parents. That reminiscing passage, as well as many others woven throughout the book, is somewhat rambling. She calls it “excess exposition in memoir” which “comes from being engulfed in a tidal wave of vague memories that haven’t solidified into scenes yet, and, in turn, [results in] a passive character…who feels and thinks but doesn’t do much.” She sums up her book quite succinctly.

But  there are undeniable nuggets of wisdom interspersed among the rambling, excessive parts, nuggets that could be very useful for a writer, such as:

Some of these nuggets I’ve heard before in other writing books and at writing conferences, so they weren’t necessarily unique, but the way they were phrased helped me see better how I could apply them in my writing life.

So, The Thorn Necklace, while rambling and repetitive, was also helpful and encouraging. I would recommend it to my writer friends.

Book Review: Behind the Throne by K.B. Wagers, a Dynamic Read