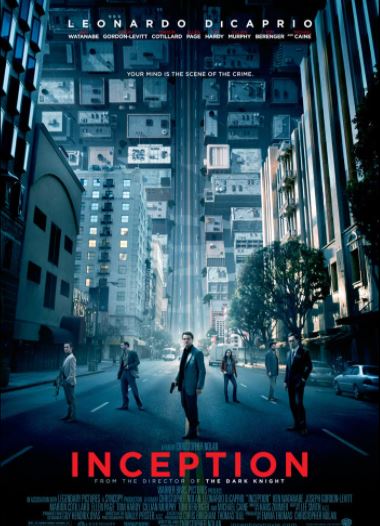 It was that movie where Leonardo diCaprio played a man who stole corporate secrets by getting into people’s dreams. He’s given the challenge at the beginning of the movie to try something new: plant an idea in someone’s head via a dream that he creates and manipulates. To do that, he has to not only figure out how to get past the person’s subconscious defenses, but work through his own fears, deep ones brought on by his very use of that dream-sharing technology with his wife. Brilliant, right?

If you’re one of those people that, like me, wish there had been a sequel to that movie, here are some movies like Inception and books like those movies to give you a similar brain-bending, dream-inducing escapist adventure:

I’m surprised I’ve never heard of Dreamscapes before, given how similar their premises are. Imdb.com says it’s about a young psychic on the run from himself, who is recruited by a government agency to experiment with dream-sharing technology so that he can plant an idea into the mind of the U.S. president.

Passage is based on the exploration of near-death experiences that sound like dreams, so it’s different in that respect, but shares the same idea of manipulating the subconscious.

It’s $3.98 on BetterWorldBooks.com, with free shipping!

Insomnia the movie is a crime thriller starring Robin Williams and Robert DeNiro, one of whom can’t sleep out of guilt. Insomnia the book is a YA fantasy/horror about a teenage boy who always enters the dreams of the last person he had eye contact with. After four years of insomnia from this, he literally can’t take it any more, until he meets a girl named Mia whose dreams are blissfully, addictively calm. But then she starts getting anonymous death threats.

Best Deal on Insomnia the Book

What Dreams May Come and Strange the Dreamer/Muse of Nightmares

You may remember What Dreams May Come as one of those serious Robin William movies, in which he plays a husband who is killed in a car accident, goes to the afterlife, visits his widowed wife as a ghost, watches as she kills herself out of grief, and then seeks to save her from where that sends her, so that they can be together in happiness. Sad and heartbreaking and ethereal, all at the same time.

Strange the Dreamer and its sequel Muse of Nightmares have that same ethereal, mournful feel, and, while not involving the afterlife per se, there are also ghosts and gods.

Best Place to Get What Dreams May Come

Although you can watch it on Amazon Prime for $3.99, it’s cheaper to get a used DVD, if you’ve still got a DVD player to play it on. The least expensive bid on it on eBay is about $3.30.

Best Deal on Strange the Dreamer and Muse of Nightmares

Both Shadow Effect and Dream Thieves, by Maggie Stiefvater, are about characters whose dreams interject themselves into reality, but one of them (ahem) is written well.

Between Amazon, BetterWorldBooks, ThriftBooks, and the other sites that I checked, eBay has the best deal at $5.09 with free shipping and all proceeds go to charity.

While Sliding Doors doesn’t have anything to do with dreams, it does have everything to do with alternate realities, as does Pivot Point. The book also explores the conflict that arises from knowing our futures through dream-like visions, and not being able or not knowing how to pick which one we want.

You can watch it for free with a free Imdb membership.

Dream Runner, which comes out in March of 2021, is about a world in which humans no longer dream, so they turn to illegal dream runners to attain illicit fantasies. Snapshot by Brandon Sanderson is a detective fantasy thriller about crime detectives sent 10 days into the past. They discover evidence of a grisly crime, but are then to pretend it didn’t happen. All kinds of illegal things going on in both the movie and the book!

And, as it so happens, Snapshot has been optioned to be made into a movie.

Best Place to Watch Dream Runners When It Comes Out

Imdb says the movie doesn’t come out ’til March, but you can watch it for free now on Amazon Prime. Not sure how that works, but….

So there you go! What movies have you seen or books have you read that remind you of Inception?