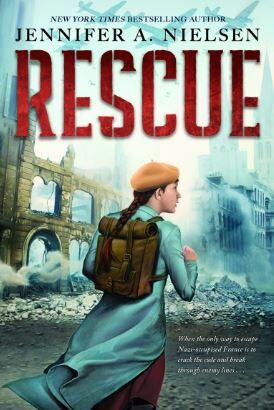 Whether you’re a fan of historical fiction or fantasy fiction, middle-grade or young-adult, you’ll find something to be a fan of in Jennifer Nielsen’s books. She’s written 18 books, 3 of them historical and 15 of them fantasy, and she’s coming out with another historical and another fantasy in the next year.

If you want to break that large fantasy category down into subcategories, like me, that’s six middle-grade fantasies and nine YA speculatives, all published through Scholastic. As far as premises, all of her books run the gamut between broken history, real-life history, magical amulets, epidemics, and immortal kings. I really enjoyed her False Prince series for its heart-pounding pace (again, I admit I’m a book adrenaline junkie), interesting plot, believable main characters whose emotions feel so present, and a good cast of supporting characters.

So I’m excited for her next books. Here’s the lowdown on them, provided from Jennifer herself:

This World War 2 historical comes out in March of 2021. Jennifer says it’s about a young girl named Meg Kenyon, who is living in Occupied France. One day she notices drops of blood leading into her family’s barn and there finds Captain Stewart, an injured British Air Force pilot. It is no coincidence that he is there. Captain Stewart is on a rescue mission that, if successful, has a chance to save Meg’s father from a German POW camp. But in his current condition, he has no chance of finishing the mission. Meg has to decide whether to finish what Captain Stewart started. This is a story of spies, secret codes, and how much Meg is willing to risk to rescue her father.

It’s a standalone, meaning it’s not part of a series, and the cover was revealed just yesterday on her website, jennielsen.com:

I had the chance to ask Jennifer something I’ve been wondering for years. I asked: “Over the years, you’ve deftly gone back and forth between speculative/fantasy and historical, middle grade and YA. What is it that draws you to those sometimes disparate genres, and if you had to pick a favorite genre or age level to write to, which one would it be?”

“I think if I were only to write in one genre, I would begin to feel like I was writing the same story over and over again. Changing genres keeps writing fresh for me and keeps me constantly challenged. But I don’t really view my writing as very different genres; I tend to write about characters in a lot of danger, and within that umbrella, I may have books that sit on different shelves, but they all reflect me and my interests. So that would be my favorite genre – simply that – danger.”

Danger as a genre? I’m totally down with that.

Book Review: Ever the Hunted, a Compelling Read