Book Review: Two Emotional Books: If I Stay and Where She Went 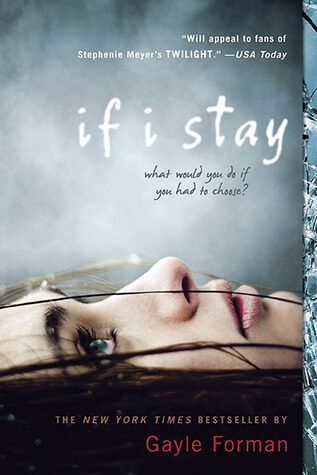 What would you do if you were a teenage girl–one of those amazing ones that really gets along with their parents–and the only survivor of a car wreck that killed them and the rest of your family? What if you survived the wreck, but just barely, and you’re somehow conscious, in an out-of-body way, and you have to choose between letting go, not being able to discern anything about what happens after that, or staying and living, exploring the potential of your gift for music and your relationship with your boyfriend, who you’re madly in love with? This is the choice faced by seventeen-year-old Mia in If I Stay by Gayle Forman. The book is a poignant, beautifully-rendered narrative about what is really a universal question: what would you do if you had that choice? If you’re looking for emotional books (because who doesn’t love a good cry AND laugh sometimes), this is one of them.

What Is If I Stay About?

Just listen, Adam says with a voice that sounds like shrapnel. I open my eyes wide now. I sit up as much as I can. And I listen. Stay, he says. Choices. Seventeen-year-old Mia is faced with some tough ones: Stay true to her first love—music—even if it means losing her boyfriend and leaving her family and friends behind? Then one February morning Mia goes for a drive with her family, and in an instant, everything changes. Suddenly, all the choices are gone, except one. And it’s the only one that matters.

If I could give this book more than ten stars, I would. It’s intense, in a life-and-death way, not an action-packed way, but because of the emotions she goes through while trying to make her decision. Those emotions are very authentic and non-trite. It’s masterfully structured. I read it in one sitting. And the style…oh, the style: so beautiful. Mia was such a well-drawn character that I felt like she could jump off the page and I would recognize her instantly. The supporting characters were unique. Such a delight to read.

Anyone who likes emotional reads like The Fault In Our Stars by John Green, Beyond by Catina Haverlock and Angela Larkin, or Between Shades of Gray by Rutya Sepetys, will like this book. If you want a book that will sweep you away, this one definitely will.

What Can You Tell Me About the Content’s Suitability for Kids (or Adults with Certain Standards?)

Common Sense Media says this about If I Stay:

What About the Sequel: Where She Went?

What’s Where She Went About?

I won’t tell you because it contains answers to the question of (obvs) where Mia went, or what she decided, but from the perspective of her boyfriend, Adam.

Like If I Stay, Where She Went‘s best price today is $3.58 on eBay, with free shipping and free returns.