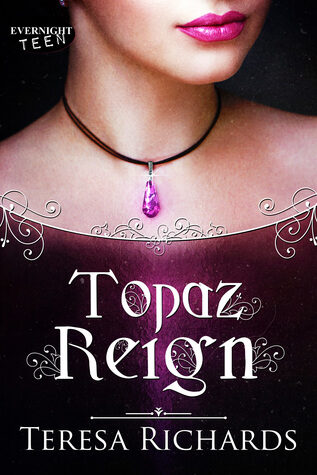 It’s been a couple of weeks since I last posted because I was asked to review the second book in a duology and had to read the first book in the series before I could read the second one and give it a fair review. Plus, life has been busy with Utah Valley Writer commitments, school visits, and doctor appointments. I’m glad I got to read Topaz Reign by Teresa Richards, the sequel to Emerald Bound. Both were based very loosely on different fairy tales and had little bits of time travel and immortality, making them genre-bending and somewhat hard to compare to any other published books. Ultimately, though, they were both good reads, Topaz Reign decidedly more so than Emerald Bound. 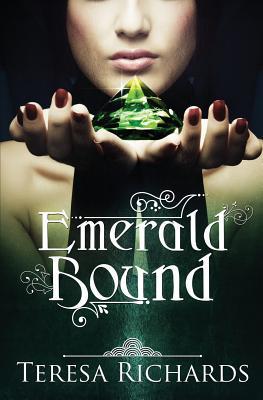 Maggie Rhodes, a high school junior and very curious teenager, learns the true roots of the tale of the Princess and the Pea after a spying attempt goes awry and her best friend Kate ends up as the victim of an ancient curse. Maggie discovers that an enchanted emerald that feeds on life is under the control of some people who use the power granted by the emerald to not age, and that it found its next victim in Kate. She meets Lindy, a school acquaintance with a mysterious past, and Garon, a handsome stranger claiming he knows how to help, and embarks on a quest to destroy the emerald and restore Kate.

I’ve compared the plots of various books to different kinds of woven textiles, like a rug in the case of The Fifth Doll by Charlie Holmberg, so in that same spirit, I’d like to compare this book’s plot with that of a loom-woven rug with a very loose weft. What I mean by that is that the weaving together of all the details presented in the first ten chapters of the story to set it up, came together in such a way that I feel like I could still see holes through them. There were some details that seemed to contradict themselves, as in the fact that Maggie describes her arms being frozen to the arms of a wooden chair by Calista, one of the people using the emerald’s power, on page 111, but then a few paragraphs later, says she “clutched at [her] middle,” and some details that didn’t seem quite plausible, like the fact that the creator of the magic emerald put into it a way for it to be destroyed, but his motive for doing so, though crucial to the resolution of this story’s conflict, is never given, not even to Garon, who spent several centuries trapped in time with the creator. Now, it’s entirely possible that I missed other details in the story that make these things clearer or more plausible, and if so, I hope someone will correct me, but these were details that took me out of the story a little bit. 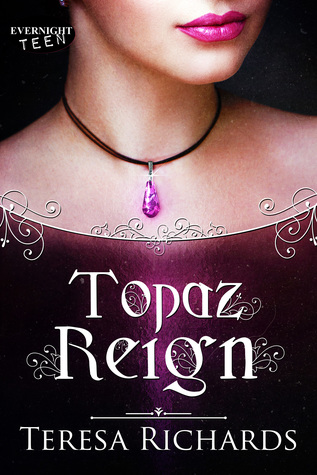 I’m glad that I read Emerald Bound, though, not only for the overall story itself and the very satisfying ending, but also because Topaz Reign made so much more sense after reading the first book. You really can’t read the second book in this series without having read the first one. Here’s what Topaz Reign  is about (be forewarned that I have to spoil Emerald Bound’s plot a little bit to tell you):

Upon the destruction of the emerald, Lindy is sent back to the time and place she would have been if she had not been kidnapped as a baby, eventually sold to Calista, and kept in bondage by her for 400 years. Turns out Lindy was the princess of the Princess and the Pea fairy tale, and the soon-to-be queen of a tiny Scandinavian country. Topaz Reign starts, for her, seven years after she was sent back, shortly after she assumes the throne. Maggie, for whom time passes more slowly in the present day, keeps an eye on her from the history books, and notices chilling changes in them that indicate that Lindy went from the frying pan into the fryer. Garon, who is Lindy’s brother and now Maggie’s boyfriend, goes back in time to help Lindy, but things get so bad that he has to return to the future, get Maggie and her brother Tanner, and take them back with him to Lindy’s time to help save her and her kingdom. They also have to destroy a giant topaz created by the same man who created the emerald so that they can restore their own mother to her rightful mind, and they do this with the help of Bea, one of their mother’s caretakers and, as it happens, the Thumbelina of fairy tale. All that with the possible but dubious help of a giant pearl that O, the creator of the topaz and the emerald, also made.

Like the first book, this one relies on a lot of details coming together at just the right times and places, but these details are more tightly-woven this time. We finally meet O, if only briefly, and some people’s motives are more clear. There were still some fraying “threads,” if you will, that decrease the story’s plausibility slightly, but overall, it’s a very intense, fun read, somewhat reminiscent of K.B. Wager’s Behind the Throne. The author is great at descriptions. If you like speculative fiction, young adult romances, magic, or fairy tale re-tellings, you’ll like these books.

Nutrition facts? No swearing. No sex or nudity. Some violence (sword fighting, etc.).

Star rating? 7 out of 10 stars, for great characters, awesome voice(s), cool premise, and a rich plot.

Full disclosure? I got free copies of both books from the author, but my opinions would’ve been the same if I’d bought them.