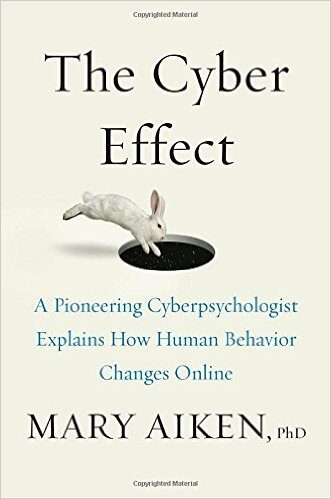 I have no trouble admitting that I very much hesitated to write this review of The Cyber Effect by Mary Aiken. It’s a non-fiction explanation of how much human behavior changes online, by a cyberpsychologist. It is a thorough examination of  the internet as a relatively new and expanding space, and a very depressing one at that.  As a book, it fulfills the parameters of its title, and is technically sound and structured. Its sources are credible and robust. But, as a description of the human race, it leaves much to be desired. And to the extent that it describes in great detail the many evil uses to which the internet has been put, one might expect that, in the interest of balanced science, it would also describe its positive uses as well, or at least its possible positive uses. But in that, one is disappointed. It is a dire read of internet psychology.

What Is The Cyber Effect About? 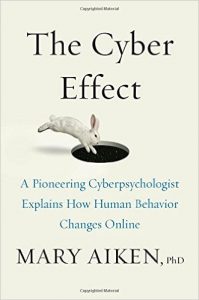 “Technology is not good or bad in its own right,” says the author. “It is neutral and simply mediates behavior, which means it can be used well or poorly by humankind.” Given that introduction, one would indeed expect, or at least hope for an examination of both the ways it has so far been used “well” and the ways it has been used “poorly” by humankind. Instead, it describes only how the internet has caused an explosion in the normalization of fetishes, addictions, and cases of hypochondria. “You don’t have to be an expert in the subject of online behavior to have observed that something about cyberspace provokes people to be more adventurous.” And, “once behavior mutates in cyberspace, where a significant number of people participate, it can double back around and become a norm in everyday life. This means that the implications of the online experience and environment are ever evolving and profound, and impact us all–no matter where we live or spend.”

While knowledge about the proliferation of humankind’s evils as facilitated by technology and the internet is helpful in combating it, so is knowledge of healthy life practices, especially those proliferated by the internet. A whole chapter is spent documenting the necessity of nursing mothers looking at their babies’ faces while nursing, as opposed to their screens, for example, based on the author’s anecdotal experience of watching one mother looking at her screen instead of her baby’s face while nursing. A balanced perspective would have included a listing of any studies that have been done documenting how many mothers do in fact look at their babies versus how many look at their screens.

Can Balance Be Found? 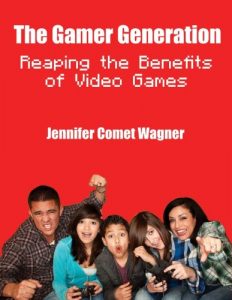 Along those same lines, many pages are devoted to the ways and reasons why a boy or girl with any kind of an ADD or depression diagnosis will most likely become addicted to online gaming. While parents of those children, like me (my oldest son has ADD), are aware of that possibility, they may not be aware of the positive effects of video games, as described in Jennifer Comet Wagner’s The Gamer Generation: Reaping the Benefits of Video Games or in various studies cited by TIME magazine in its analysis of the Cognitive Benefits of Video Games. This is not to say that a knowledge of the very possible, very negative implications of over-involvement in cyberspace is not important, but by its very existence and by the author’s own admission, too deep a knowledge of such things can be an evil in and of itself.

One could easily argue, as many have done, that any call to balance the debate about the overall value of the internet, and technology in general, is a call to ignore its more ghastly applications, to live in gleeful and willful ignorance. That is not what I advocate by providing this negative view of The Cyber Effect.  While I know that humankind can indeed be depraved, and that the internet has definitely exacerbated that tendency, I have, perhaps, knowledge of some of the more practical and positive uses of technology, having interviewed many wonderful women who’ve done so for MomItForward.com.

Who Should (Or Shouldn’t) Read The Cyber Effect?

I would say that all parents should read it, but only if they make it part of a larger and more focused study of the effects of internet use on their kids. I’m reluctant to review any book negatively because I know the great amount of work that goes into writing them. But it is not the book itself with which I take umbrage; it is its subject matter, its fatalistic view of humankind as defined by its use of the internet. No viable alternatives or positive steps are really given, other than those suggested by a listing of other countries’ approaches to cyberspace regulation. Those alternatives are called for, though: “We need to do more for families, and stop expecting parents to paddle their own canoes in cyberspace,” for one. “We need to start funding law enforcement better, so it can do its job in cyberspace. More resources are needed, and more teams need to be trained in this work. Academics and scientists need to be more flexible and responsive. We should bring together a large, diverse team of people to discuss and brainstorm about how best to redesign [the internet].” A much more in-depth discussion of these possibilities would have balanced out the book greatly.

BetterWorldBooks has The Cyber Effect for $4.83 with free shipping.

Note: I received a free ARC of the book through NetGalley. All opinions provided herein are my own. Also, this post contains an affiliate link, which means I earn a small commission if you click through to purchase a copy of the book.

Book Review of Shatter by Nikki Trionfo: an Intense Mystery