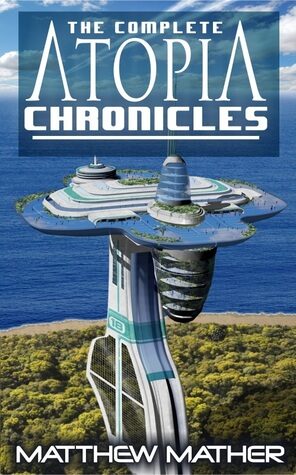 It’s been a busy week getting ready for Halloween, but also one in which I also received a lot of encouragement from my writer friends and reworked my synopsis for Forced. I’m excited to embark on the 7th draft of that manuscript, with a plot that is now more intricate and truer to my character’s natures. Such a process! I finished reading The Atopia Chronicles by Matthew Mather a while ago, but haven’t had a chance to review it until now. It was an intriguing but ultimately disappointing read. Let me tell you about it.

What Is Atopia Chronicles About?

Dr. Patricia Killiam is rushing to help save the world from itself by giving everyone everything they’ve always wanted. The question is: is she unwittingly saving the world only to cast it towards an even worse fate as humanity hurtles across the brink of forever. What could be worse than letting billions die? In the future, be careful what you wish for.  The Atopia Chronicles are an exploration of the meaning love, life and the pursuit of happiness in a world teetering on the brink of post-humanism and eco-Armageddon.

I was intrigued by the premise of this book, and the fact that it was epic sci-fi. But ultimately this book was a disappointment. I only read 68% of the way through, and decided I couldn’t push on any longer. In the form that I read, which was an anthology-like compilation, I think, of several short stories all set in the same world, it was WAY longer than it needed to be.

It was based on a fascinating concept and had a very detailed exploration of a society taken over by technology. It could have been told well in half as many pages and with fewer characters. Also, I almost didn’t read past the first chapter because the first main character is so not likable. If I were Matthew Mather, I would have picked any one but her to start the story.

But, if you’re an epic sci-fi fan, and are into thorough world-building, I would definitely recommend this book.

Books That Should Be Made Into Movies