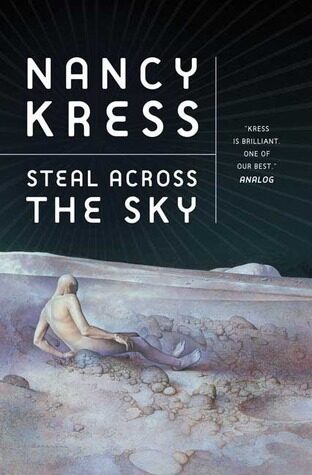 Nancy Kress is really good at writing hard-core science fiction, and for that alone I applaud her. To do that in such a male-dominated field is brilliant; to do it repeatedly is amazing. I thought her book  After the Fall, Before the Fall, During the Fall  was brilliant. Steal Across the Sky, also by her, was less than she’s capable of, though. Where this book excels in world-building and uniqueness, it falls short in the area of characters with whom one can really relate and who have deep emotional progression.

What Steal Across the Sky is About 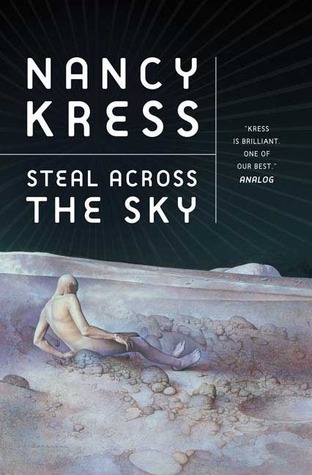 The book is about two people who volunteer visit seven planets and “witness” for a mysterious group of aliens that all-of-a-sudden arrived, built a base on the moon, and put an ad on the internet. These aliens claimed to have wronged humanity ten thousand years before, and need some volunteers to visit a bunch of planets seeded with human stock. Italian-English grad student Lucca and waitress Cam are among the twenty-one volunteers chosen, and they visit two planets. Cam encounters a monolithic, brutal and appallingly bloodthirsty culture where a game determines everybody’s destiny. On Lucca’s planet, evidence mounts that the people can perceive and converse with the recently dead, something Lucca rejects. Once all the witnesses return to Earth, a compelling picture emerges: on half of the planets visited, the inhabitants can indeed see and chat with the recently dead. The Atoners explain that those inhabitants carry a gene that allows them to do so. On the other planets, and Earth, the Atoners deleted the gene. (They don’t explain why.) On gene-less Earth, chaos ensues as Kress explores the consequences of that premise.

And, as you might imagine from that description, what ensues–actually what happens throughout almost all of the book–is essentially a philosophical discussion about what that means for humanity.

Why I Didn’t Connect With the Book

While the premise is fascinating (as I tend to find with many science fiction books), and the execution of that premise in line with the expectations of its genre, the emotional quotient is just not there. It would have been neat, I think, to see that chaos play out and then resolve in Lucca’s and Cam’s relationship, for instance. I think that would’ve made for a more intense, relatable book.

Also, because it’s adult sci-fi, the pacing was slower than that of YA. I can’t dock it for that because that wasn’t a fault of the book per se, just a matter of my taste.

If you’re a serious fan of science fiction, I would dare say that this book should be on your required reading list. If you liked books like A Case of Conscience, which explores the nexxus of science and religion from an other-worldly angle as well, you’ll like Steal Across the Sky. I, for one, am going to continue pursuing my goal of reading all of her books, even though this one wasn’t my favorite.