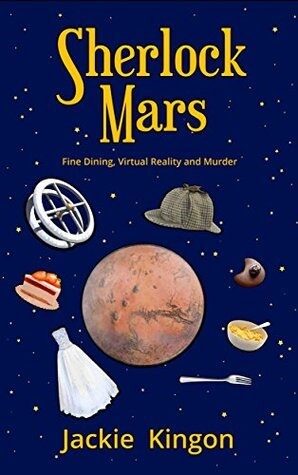 If you’re at all familiar with The Hitchhiker’s Guide to the Galaxy by Douglas Adams, you’ll understand me when I say that the world desperately needs another book like it. The wry humor, random and rampant world-building, the characters with awesome names (Zaphod Beeblebrox? Ford Prefect?) and even more awesome personalities all make for a romp of read. I recently read a book—Sherlock Mars by Jackie Kingon—that was similar, and, while I enjoyed it, wished it could have better filled the huge shoes left by its predecessor. 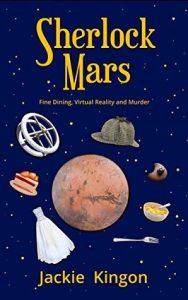 And truly, the Hitchhiker’s Guide, may be the only one of its genre (a very small, niche one) to grow such big “shoes.” It was originally a radio comedy on BBC Radio in 1978, but was later adapted to other formats, including stage shows, novels, comic books, a 1981 TV series, a 1984 computer game, and a 2005 feature film.  A prominent series in British popular culture, The Hitchhiker’s Guide to the Galaxy has become an international multi-media phenomenon; the novels are the most widely distributed, having been translated into more than 30 languages by 2005.

What Sherlock Mars Is About

“Fine dining, virtual reality, and murder,” proclaims the front cover. Molly Marbles, the main character, runs a successful restaurant on a terra-formed Mars. When a virtual restaurant opens next door, offering the experience of delicacies with none of the calories, she’s worried about what it will do to her business at first, but then finds that it’s quite a boon. But then, when the virtual restaurant’s owner is murdered in her kitchen, Molly, amateur detective, cranks into high gear to help the police solve the mystery. While doing that, she also helps plan her pop-star diva daughter’s wedding, keeps her kitchen staff from feuding, and protects her android friend from the humans-only mob. And tries to figure out if the infamous Cereal Serial Killer, who has escaped from prison, has anything to do with anything.

What I Liked About Sherlock Mars

What Could Have Been Improved

Obviously, anyone who likes anything by Douglas Adams should probably buy this book. More probably, though, anyone who likes Terry Pratchett’s Discworld series would love Sherlock Mars. Pratchett was the U.K.’s best-selling author before J.K. Rowling.

stars: maybe a six out of ten

Book Review: Two Emotional Books: If I Stay and Where She Went