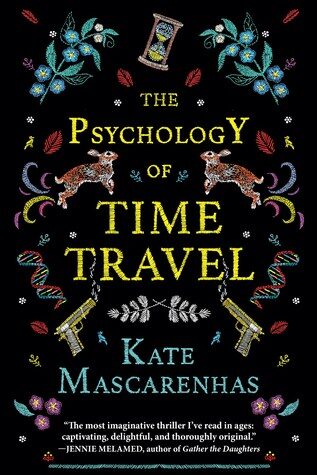 What do I say about a book that I didn’t particularly like, but that some of you might? The Psychology of Time Travel by Kate Mascarenhas was this book, and while I found it to be of sound construction, it did not “float my boat.” However, the things I didn’t particularly enjoy or connect with might be the very things you would like. Let me tell you a little bit about it, then you can read it, and we’ll discuss. Maybe I’ll change my mind! That’s been known to happen.

What is Psychology of Time Travel About?

For those of you on the fence about sci-fi, or willing to venture just toe-deep into that genre, you might like this, just as you might like these other “soft” sci-fi books. As the title implies, it’s more concerned with the effects of time travel on the travelers than on the mechanics of time travel itself. The premise is that, in 1967, four female scientists build the world’s first time machine. But just as they are about to debut it, one of them suffers a mental breakdown, which puts the whole project—and the future of time travel—in jeopardy. To protect their invention, the member that had the breakdown is exiled from the team.

Fifty years later, though, time travel becomes big business. Ruby Rebello knows her beloved grandmother, Granny Bee, was that exiled pioneer, though no one will tell her more, and Bee seems perfectly fine. But when Bee receives a mysterious newspaper clipping from the future reporting the murder of an unidentified woman, Ruby becomes obsessed: could it be Bee? Who would want her dead? And most importantly of all: can her murder be stopped?

Book Review of The Psychology of Time Travel

Sounds like an interesting plot, right? It’s told from the perspective of several characters, in various timelines spanning several decades. It reads more like women’s fiction or mystery than science fiction. However, I had a hard time connecting with most of the characters–with the exception of Bee and Ruby–because there were so many of them. This may have been for a couple of reasons:

That being said, the multiple perspectives do make the central mystery of the book–having to do with the murdered woman–unfold in a unique way. From what other reviewers of this book said on GoodReads, I was not alone in my confusion, nor in my other reason for not engaging with the story, which is the fact that one of the characters is involved in more than one lesbian relationship, one with a married woman. It wasn’t central to the plot, I didn’t think, but it was there enough to detract from the story, for me. Those readers that like to read about F/F or extramarital relationships might enjoy The Psychology of Time Travel for that reason alone.

What’s the Deal on The Psychology of Time Travel?

The best deal I could find on this book was $7.99 for the Kindle version, which was way lower than the $15-$22 price advertised for it everywhere else, even on used-book sites.

What time-travel books have you enjoyed? Let me know in the comments below!

Disclaimer: I received a free ebook copy of this book via NetGalley in exchange for my honest book review.

Video Game Review: Legend of Zelda Breath of the Wild