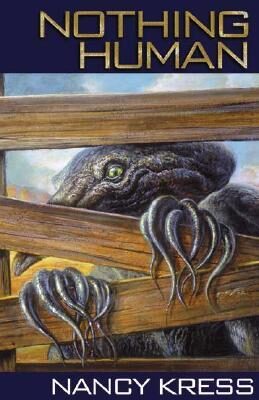 As I wrap up this week, which has been full of: 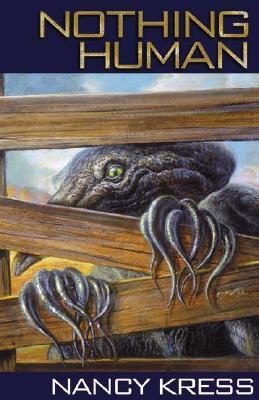 I can’t help but be thankful for a good life. Some things feel scary, and I have thoughts that I’d really like to get into a blog post to see if I can get some real, constructive conversations going about issues that concern all of us. In the meantime, though, I’ve got a review of Nothing Human by Nancy Kress. Nancy is an American female science fiction writer, which is partially why I bought and read this book, but I was also intrigued by the premise of Nothing Human, which is:

What Nothing Human Is About

…that, in a setting where Earth has been ravaged by global warming, aliens contact and genetically modify a group of 14-year-old kids, inviting them to visit their spacecraft. After several months of living among the aliens and studying genetics, the students discover that the aliens have been manipulating them and rebel. Upon their return to Earth, the girls in the group discover that they are pregnant and can only wonder what form their unborn children will take. Generations later, the offspring of these children seek to use their alien knowledge to change their genetic code, to allow them to live and prosper in an environment that is quickly becoming uninhabitable from the dual scourges of global warming and biowarfare. But after all the generations of change, will the genetically-modified creatures resemble their ancestors, or will nothing human remain?

It’s a fascinating apocalyptic premise borne out by an interesting storytelling structure. It’s very intriguing to consider how we as a species could evolve to survive a slow apocalypse, especially if “guided” by an alien “human” species. It was a very thought-provoking read.

I wouldn’t give Nothing Human a full 10 stars for a few reasons:

I’d still give it at least 8 out of 10 stars, though. Sometimes, I like books that really make me think, but that also have interesting and relatable characters in thoroughly unrelatable circumstances.

What are you reading this week?