I suspect that any book that takes place on the English moors and has a smidgeon of romance in it runs the risk of being compared to Wuthering Heights by Emily Bronte. Havencross by Julie Daines, because the moors feature prominently in its setting and  is a romance, could be compared to that classic book, but I think such a comparison would be inaccurate. To me, it was a combination of Blackmoore by Julianne Donaldson (a book most definitely compared to Wuthering Heights) and the Dark is Rising series by Susan Cooper. Though the latter books involve ancient magic and younger characters, I 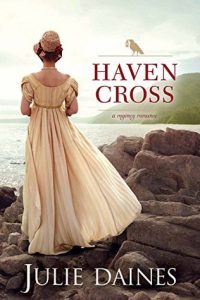 believe they share a strong sense of mystery and adventure with Havencross, traits which make it a stand-out in the regency romance genre. And its resemblance to Blackmoore lies in the charm of a main character who thinks she will never marry, but whose expectations of life are turned topsy-turvy by circumstances she could never have foreseen. Indeed, Havencross is a romance in the most charming of ways, mixed with surprising twists of intrigue and suspense.

Elaine Cardinham, the main character, and her parents are forced to return to their country home in Cornwall for refuge when a shocking scandal involving her father spreads through London society. But Havencross reminds her of the mysterious disappearance of her brother and a marriage proposal she spurned, both five years ago. There, she runs into the man who offered his hand, Gareth Kemp, and also, surprisingly, into a man who has followed her from London to offer her his hand now. He’s an earl, and she accepts without hesitation so as to escape her circumstances, but finds that Gareth never stopped loving her and that she really doesn’t know her fionce at all. They’re both distracted by dangerous and mysterious smugglers plaguing the Cornish coast, killing neighbors and others more and more frequently. As Elaine attempts to run from her past, she ventures ever closer to a dangerous truth—and finds that Gareth may be the only one who can save her from a deadly finish.

There are a couple of elements that make Havencross more than just a romance or a mystery:

Comment here or on Twitter if you’ve read this book or would like to read it, and I’ll enter you into a drawing for a copy of Havencross, signed by Julie Daines! Drawing will end at 11:59 p.m. August 19th.