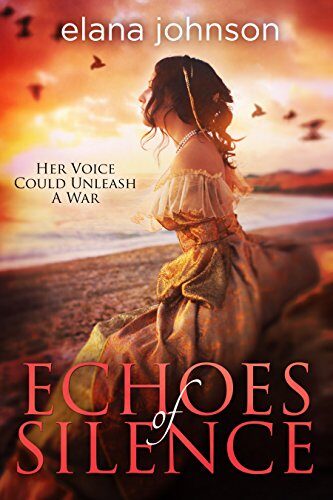 You guys. Have you read anything by Elana Johnson? She’s written almost thirty books, under either her name or the pen name Liz Isaacson. She’s local (i.e., Utah), super nice, and an awesome speaker. And her books are addictive. I just read Echoes of Silence by Elana, and it was not-put-downable.

What’s Echoes of Silence About?

Twenty-three-year-old Echo del Toro doesn’t know about the bride-choosing festivities the tyrannical Prince of Nyth has planned–until she’s taken from her home by five armed soldiers. She’s led under the cover of a magically produced storm to an opulent compound to join hundreds of girls, each vying to be chosen as the next Queen of Nyth.

As she plays the charade of falling in love with the Prince, Echo realizes three terrifying truths: He is hungry for her song-magic, he has a secret plot to dethrone his father, and he is not wholly unlikable. Faced with the strongest dark magician in centuries, Echo must know when to let her voice fly and when to hold her tongue, or she’ll find herself caught in the lasting notes of a song that can’t be unsung.

It is YA speculative fiction, set in a kingdom of indeterminate chronology and history. Most of the book takes place within the walls of the prince’s castle, and there are noble people, city gates, markets, and so forth, but no dragons or elves. There is magic, and it is a unique kind. It is based on music, wielded with song. In that respect, it is like my book Forced, which I wrote to explore the idea that the emotions one often feels when listening to music, or making it, could develop into actual powers.

The magic system of Echoes is intriguing to imagine as it incorporates both the ability to create ethereal beauty, and to kill, as well as everything in between, depending upon the mindset of the wielder. That system, essentially, forms the basis of the plot of the book, as Echo, the main character, uses it to provide for and protect herself and her sister, and to avoid being taken advantage of for it.

Echo is a great main character, both despite and because of her lack of ability to control her tongue. She says whatever comes to mind, which often gets her into trouble. The combination of her musical power and lack of a verbal filter make for a great irony. The other characters, too, are equally as intriguing for the things they possess in spades and the things they don’t: Castillo, for his determination and lack of trust; the Prince (Cris), who carries little power but a great ability to understand people, Echo’s grandmother, who passes away before the story begins but whose memory and example linger on almost every page of the book.

This was an excellent read, full of the interactions of these fascinating characters and wonderful prose that made the story flow like a sonata. Ten out of ten stars.

Great. So What’s the Deal?

Actually. There isn’t one for this book. It is currently unavailable, according to the publisher.

Everneath, a YA Retelling of the Persephone Myth: Book Review and Deal

Book Review: The Rose and The Crown, a Nice Read