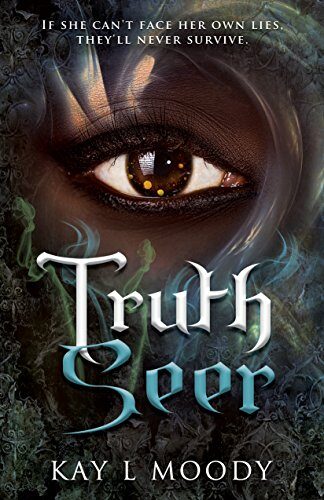 How was your 4th of July? What did you do? We went to two family gatherings, one for my side of the family and one for my husband’s, and ate a ton at both. I feel like it was a mini-Thanksgiving. Of course, I spent a little bit of time reading and looking for deals, and I wanted to tell you about a book that just came out that’s only 99¢! It’s Truth Seer by Kay L. Moody, kind of Lara Croft: Tomb Raider with superpowers.

Egypt, 2121. Imara Kalu knows how she wants her future to go: become a police interrogator in Kenya and then graduate as a truth seer in her last semester of the summer training program. But her plans fall apart when a group of terrorists take over the school and carry out a desperate kidnapping. Devastated that her sister is among the victims, Imara leads a rescue team and descends into the dangerous catacombs where the hostages are rumored to be hidden. Although suspicious of others because of the truth she sees, Imara knows the rescue team will need her help as a truth seer to bypass the lethal illusions laid by the abductors. But as the terrorist traps escalate, Imara realizes how much truth she’s been ignoring and that holding back could get her sister killed. Throughout the journey, Imara confronts her past and amplifies her abilities as a truth seer only to discover that her sister’s kidnapping is just one piece of a much darker secret.

Aside from the Lara Croft movie, like I said, Truth Seer reminded me of two books: Unearthed by Amie Kaufman and Meagan Spooner, which I reviewed here, and The Conspiracy of Us by Maggie Hall, which I’m reading right now. All three are about people trying to work their way through a series of very obtuse clues to discover a mysterious but great boon in some kind of ancient structure or structures. In Unearthed, it’s a temple on an alien planet. In Conspiracy, which is sort of a YA Davinci Code, it’s places like the Cathedral of Notre Dame. In Truth Seer, it’s a catacomb in future Egypt.  Imara, the main character, can see people’s emotions, an ability that she hopes will help her find and rescue her sister from kidnappers but which also affects the dynamics between her and the other people who help her explore the catacombs. This book is adventure, emotion, and intrigue. I had a little bit of a hard time connecting with Imara, but can’t put my finger on why.

If you buy Truth Seer on Amazon, where it was published, in the next 24 hours, you’ll only pay 99¢. After that, the ebook will go up to $4.99 (which is still a good deal) and the print book will be $12.95.  I’ve got a free physical copy to giveaway to a random winner selected by Rafflecopter: a Rafflecopter giveaway

I’ve got an exclusive interview with Kay Moody, the author, coming out tomorrow to all my subscribers. If you haven’t subscribed to be sent newsletters and notification of new posts, you should do so now, on the right sidebar of my main page!

The Nonsense Factory: A Book You Won’t Read?