Book Review: Behind the Throne by K.B. Wagers, a Dynamic Read You guys! So much has happened this week that I’m behind schedule in getting a review up, but I promise you that you’ll almost be glad for the tough stuff I’ve gone through because it gave me time to read an awesome book. My mom had major surgery two Thursdays ago, so I spent a couple of days in surgery waiting rooms and at her home helping out. I was at her house when I got a call from my husband saying my oldest son was quite sick. I drove home to find my son puking constantly, unable to walk for the vertigo he was experiencing, and absolutely miserable. Long story short, he had to be hospitalized earlier this week, and we’ve been running around to various doctors since then because the dizziness is taking its time leaving his head.

What Behind the Throne is About 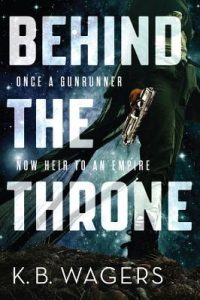 I requested a copy of Behind the Throne through Netgalley some months ago, and used the many hours waiting for medications to take affect and doctors to examine him to read the free ARC I got of the book. It’s an adult sci-fi, about a young woman named Haili Bristol who is as a gunrunner (i.e., a mercenary and dealer of guns). Really, though,  she keeps a huge secret from her fellow gunrunners, which is that she is a princess, heir to the throne of the whole galactic empire of Indrana. She ran away from home some 20 years ago, ostensibly because she didn’t want the responsibilities of being heir to the throne, but also because she was looking for the man who killed her father a few years before that. She’s forced to return home and confront her mother, the current empress, who hasn’t forgiven her daughter for running away, or for being the least able of her four daughters to be an empress. Haili, after those 20 years, is now quite sure she doesn’t want to inherit the throne, though she hasn’t found her father’s killer, but she’s compelled to, physically, by the bodyguards sent to retrieve her, and emotionally, because they reveal that all of her sisters have been killed and her mother’s health is failing.

On top of all of this, there’s a rebellion underway on Indrana, and as soon as Haili arrives, various political groups and terrorists start attacking her. It’s all she can do to stay alive and out of her mother’s condemning sight, but she finds that the more she endures, the better she’s able to grieve her dead sisters and sympathize with her mom. That, and the fact that her gunrunning boyfriend was killed and her crew murdered make it easier for her to stay.

Why I Liked it…and Why You Probably Will Too

It sounded really cool, but as soon as I started reading it, I was really put off by the fact that it started with a lot of gore and swearing. I’m just not a big fan of gore and swearing, y’know? I decided I’d read to the fourth chapter to see if that stuff lessened, as the premise was just so cool and the main character so…dynamic. I’m glad I kept reading, even all the way through to the end, because it was a great read. Here’s why:

“Initially, I’d been [mad] about the body mod screwup that had left me with this permanently green curly hair. The color had grown on me and the rest of it–from my darker skin and my tall, rangy build to my narrow face with a pointed chin–was more than suitable. Now the thought of the hysterics my hair would cause at home made it worthwhile. Maybe I’d go home, hang around just long enough to see the look on Mother’s face.”

These few lines describe the kind of tech she has access to (world building), and her physical appearance and motives (characterization). This is good writing.

“His words slammed into me, burning like the ten thousand volts of a Solarian Conglomerate police taser.”

“Tell them, Hail” (talking to herself), “the voice in my head screamed. Just tell them to let [your cousin] to keep doing what she’s doing and you’ll get out of their way. You don’t want to be the heir. You can go back to your life. Back to [your] life without Portis. My heart broke again, falling out of my chest and shattering on the rose quartz hearth at my feet.” 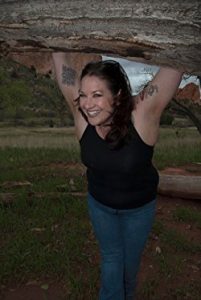 There are a lot of characters and plot threads, which is appropriate for the genre but difficult for me to keep track of. I would have really appreciated a character glossary, a word glossary, and a map. I’d even go so far as to say they were necessary. It’s possible, though, that I am just that forgetful; you might not experience this same difficulty when reading this book.

There is a sequel to Behind the Throne, called After the Crown, that I immediately bought after finishing the first book. There will be a sequel to After the Crown that will be released in November of this year. If you’re one of those people who doesn’t like the suspense of waiting for the next book in a series to come out, I would definitely wait until the last one comes out to buy the whole series. But then be warned that you might be bound to your Kindle or couch for a week while you finish all three books.