As I understand it, Dean Koontz is a prolific author who writes suspense thrillers that contain elements of the paranormal, horror, science fiction, and other genres. The Odd Thomas series, containing seven books and five novelettes, is only one of many he has written. It has a definite paranormal/horror bent, as well as a strong “literary” feel to it, being grounded more in the “odd” gift of the titular character, and the consequences of that gift, than in the pace of those consequences. It is, in my mind, an odd combination. Forever Odd is the second book in the Odd Thomas series, the first book being named Odd Thomas. 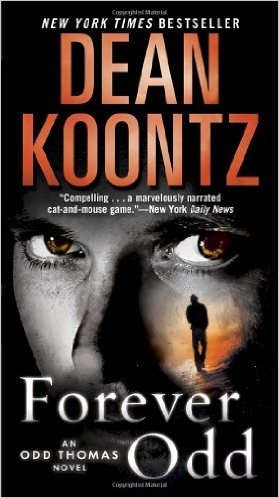 I read the first one a couple of years ago. I listened to, rather than read, Forever Odd during my commutes (yay for audiobooks!) about a year ago.   Both books follow a young man named Odd Thomas (yes, that’s actually his name) who is able to see dead people and feel a kind of “psychic magnetism” toward them or toward people that are in trouble.

The First Book: Odd Thomas is Awesome at Being Odd

“A mysterious man comes to town with a voracious appetite, a filing cabinet stuffed with information on the world’s worst killers, and a pack of hyena-like shades following him wherever he goes. Who the man is and what he wants, not even Odd’s deceased informants can tell him. His most ominous clue is a page ripped from a day-by-day calendar for August 15. Today is August 14.”

This second book, though, I didn’t enjoy nearly as much. This is its synopsis:

“A childhood friend of Odd’s has disappeared. The worst is feared. But as Odd applies his unique talents to the task of finding the missing person, he discovers something worse than a dead body, encounters an enemy of exceptional cunning, and spirals into a vortex of terror.”

The first half of the book is Odd’s discovery of the disappearance of his childhood friend and the brutal murder of the friend’s stepfather. He searches for his friend Danny, thinking the murderer and kidnapper is Danny’s biological father, a convict. He discovers (warning: start of a semi-spoiler) halfway through the book that the blame, in fact, lies with a different culprit, and spends the rest of the book trying to figure out how to defeat her.

It is out of this structure that my main complaint arises. The villain, Detura, is evil, sadistic, and bloodthirsty to the core. She seeks out ghosts and  the ability to see them. She revels in causing pain. In short, she is a flat character. She has no intriguing backstory, redeeming motives, or even moments of uncertainty; she’s just horrible (end semi-spoiler). This flatness, or simpleness, is a great exception to the many other utterly unique and delightful, oxymoronic and relatable, complex characters that inhabit Koontz’s books.

And, without a complex, truly interesting villain, the conflict and plot of the book fall flat. It becomes simply a struggle for Odd to keep his friend, who has brittle-bone disease (a handy plot device) and himself alive. While propped up occasionally by bursts of action as Odd fights off Detura’s henchmen, the plot mainly consists of him trying to outthink his way out of the maze of problems she creates for him.

In my ten-star system, I would only give this one a four.